There has never been a better time for you to get started with genealogy.

Where once the access to historic records was only available offline, the digitization of records and their online availability have contributed greatly to driving interest in genealogy.  Tools, platforms, resources are continuously being introduced and enhanced.

Yet for the beginner to genealogy, this vast number of access points and choice can be daunting. There are so many different paths to pursue.

Where to begin? What are the best (and free) resources? How do you research a common Irish surname? What if you know you have Irish ancestry but you're not sure from where in Ireland? What side of the family should you research first?  How should you get organized with research?  These are many of the common questions the beginner asks.

Does this sound familiar to you?

Have you done some searches, accessed a few sites but you're craving a roadmap, a baseline to make it a little less overwhelming?

While there are workshops and conferences they may not coincide with your schedule or learning style but what you do know...

You know that you want to get started on this journey now.  You know you want to explore your family history and your Irish heritage.

So it then becomes about about simplifying this journey. How?

Sleuthability Lab, the online course for beginners to Irish genealogy.

Sleuthability Lab, is the new online course for beginners to Irish genealogy.  Borne out of an interest and passion in genealogy and to inspire beginners to get started, instructor, Bridget Bray created this learning opportunity.

The course is structured to provide key information to get started, a centralized approach for content and a pace set by YOU.  Content is provided through presentation slides, accompanied by audio as well as downloadable reference guides and worksheets.  A dedicated section, the Library, houses all downloadable documents and includes additional reference materials.

Sleuthability Lab presents five modules, within which a series of short lessons break down the module focus.  The modules are:

Welcome and introduction to Sleuthability Lab for Beginners to Irish Genealogy, outlining the course content, focus, format and structure.

Sets the stage for the beginner genealogist to getting organized. From factors to consider in selecting paper or digital organization options, to identifying the key organizational priorities, this module outlines the various choices and proposes best strategies when getting started.

Provides the foundation for key areas of importance when beginning with Irish genealogy research. The lessons detail what to know when getting started, provides an overview on key details regarding Irish history and geography, offers context when researching other regions of the world, and concludes with an overview on various name types and naming patterns.

Begins with a focus on research goals and the management of expectations when getting started. The initial research steps are outlined alongside with the identification of search tools and tips and a selection of various research resources.

The last module follows the completion of the beginner genealogy roadmap outlined in Module 4. The focus turns to setting the future direction of the research and provides a series of options for next steps with recommendations on how to achieve them. 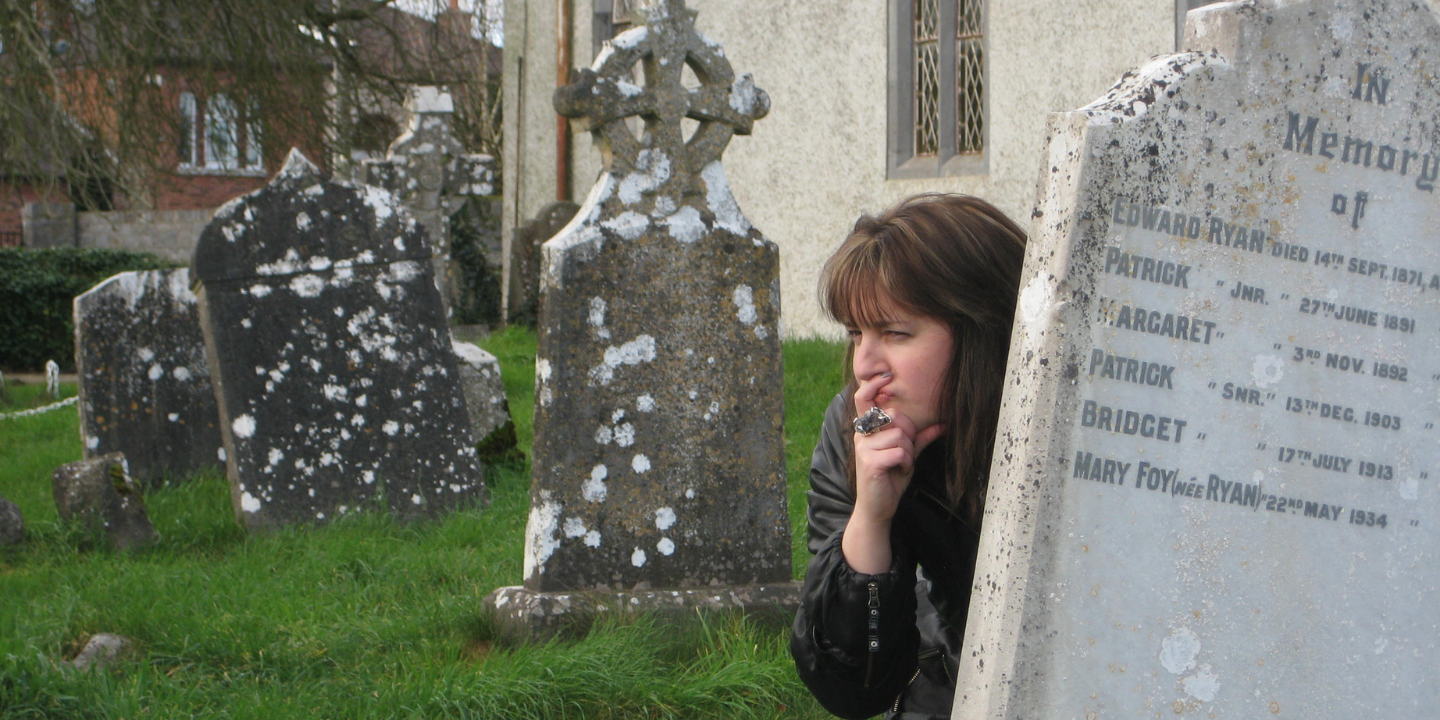 Bridget Bray, pictured by the gravestone of her ancestors in co. Limerick, optimizing the 'sleuthability' look...of course!

Just over ten years ago, Bridget uncovered that part of her ancestry was Irish.  Having never asked older generations about the family history when they were alive, there was little to no information with which to begin.  There was no knowledge from where in Ireland, no appreciation of the path (and twists and turns) of researching a common surname (and many first names) or where and how best to begin.

Determined to find out more, she researched, read and used numerous genealogy resources, attended conferences, conducted multiple research trips to Ireland, connected with locals, networked with the professional genealogy community and used creative strategies to build out the family tree and story.

In doing so, it spurred an interest and passion to inspire, engage and create opportunities for others to get started with their own research.

In 2009, she formed the New York City based Irish / British Genealogy membership group; in 2012 launched The Genealogy Event, sourcing speakers and building out programs in genealogy and DNA for many years in both the US and Ireland.

She began undertaking speaking engagements across the Irish community at the Irish Arts Center, the New York Irish Center, several The Genealogy Events and at the Department of Foreign Affairs (of Ireland) 2016 commemoration of the Easter Rising.

As the interest continued to grow in Irish genealogy and more people came forward looking to get started, it sparked an idea.  The idea: the creation of a flexible digital learning opportunity that provided a foundation to getting started: Sleuthability Lab.

Sleuthability Lab is now a way for Bridget to continue to inspire others to begin with Irish genealogy.

GET STARTED NOW
We suggest moving this party over to a full size window.
You'll enjoy it way more.
Close
Go Fullscreen